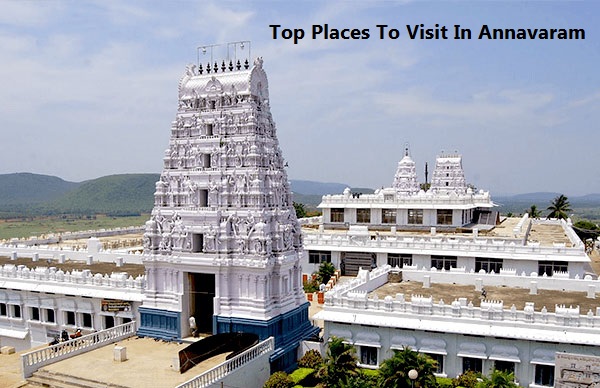 Annavaram is the top second most important and famous holy temple after Tirupati in Andhra Pradesh. Lord Satyanarayana Swamy with his wife Sri Anantha Lakshmi on one side and with Lord Shiva on the other side the temple is devoted to. This place is more attracted by both Vaishnava and Shiva devotees. The temple built on Ratna Giri hill which is about 300 feet above the sea level. The temple is built in Dravidian style. The devotees will believe that their wishes will be fulfilled when Satyanarayana Swamy Vratam is performed here. This place is followed by pampa river.

As per records, the temple was built in the year 1891 by Raja Ramanarayana who is the Zamindar of Gorasa of Kirlampudi estate. It is said that one poor Brahim of the village named Earanki Prakasam got a dream in which lord appeared and told him that his idol was left on the hill without any worship. The Brahim thought of trace it and reconsecrate it. The Brahmin has explained the same to Sri Ramanarayana. Both of them traced the idol on the hill and worshipped it and settled it on a spot. The temple was reconstructed in 1933-34 and again in 2011-2012. Now the temple will appear in the form of a chariot with four wheels. The idol is usually in the form of cylindrical shape and 13 feet high, the lower sanctum represents Lord Brahma, the middle portion represents Lord Shiva and the upper portion represents the Lord Vishnu. The idol of the Lord Shiva Lingam represents here the Trimurti this which is a unique attraction.

This is next must visit place which is at a distance of 15 km from Annavaram. The temple is wedged between two forest hillocks. Here the devotees will offer animals to the goddess and they believe that goddess Thalupulamma Thalli will protect them from road accidents and dangers. Majorly the people who purchase the vehicle will do all these offerings to the goddess. It was believed that the sage Agastya settled here for meditation and named the mountains Darakonda and Teegakonda.

The beach was at a distance of 37 km from Annavaram and 10km from Kakinada. The beach is located on the Uppada road and wide shore is the main attraction. The sunrise and sunset are very interesting to watch at this beach. A beautiful park is also located near the beach.

This temple is dedicated to Lord Shiva which is an ancient temple. It is one of the Shakti peetam among all the Aastadasapeetas. The seat place of goddess Satidevi has fallen on this place so it is called Pitapuram. It was said that the sage Vyasa, Pandavas and Kunti visited this holy temple in Dwapara Yuga, Rama visited during Tretayuga and Trimurthis visited during Kruthayuga. Here Lord Shiva will be in the form of Cock.

Kumararama Bhimeswara Temple Samarlakota which is dedicated to Lord Shiva and the temple is one of the Pancharamakshetras in Andhra State. The temple was constructed by Eastern Chalukyan king Bhima during 9th and 10th centuries. This temple was located at a distance of 40 km from Annavaram to Samarlakota. Lord Kumara Swamy had installed the Shiva Linga here after defeating the demon king Tarakasura who theft the Amrutha Shiva Linga while doing Ksheerasagaramathanam.

Are you excited to come to Annavaram and visit the above places? But in a confused state where to stay. Don’t worry. We Satyadeva Residency is here to help you and we provide you 24*7 online booking for the rooms. We have good customer service and restaurant facility is also available. Contact us now.